Many accidents hit the road everyday, which do not only hurt lives, but also leave the vehicles dilapidated. If air bags are for people, then grille guard is for the cars or trucks. The majority of Lexus Grill Guards are made with stainless steel tubing, so they are light and they look great. Stainless steel is also great because it will stand up to the test of time and generally will not rust and is very resistant. Chrome grille guards are like a crown in many ways. They are a sign of royalty, they cover the head of your Lexus, they are powerful, and they let the masses know that you mean business. If you take your truck out on the trail, then grille guards may also be called brush guards or bull bar. 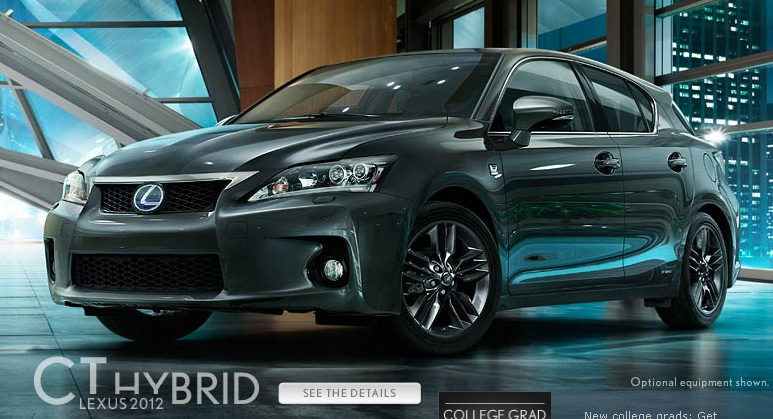 These are several names for the same purpose. Whether you drive in the woods or the highway, the most important thing is that you get a quality Bull Bars made out of chrome. Protecting your truck with quality parts will help you achieve the goal of duration and it will make your truck a unique king of the road for many years to come. When you're in the market for a truck grille guard, there are a few things to bear in mind. The first is that you should only purchase grille guards that are designed to fit your Lexus model. This eliminates the need for drilling new holes in the underside of the vehicle and provides a perfect fit for your new push bar. The second thing that you need to look for is a complete package, if you want your Lexus Grill Guards with all the options, including a skid plate as it provides protection below the engine, as well as in front of the truck.

Lexus cars and SUVs have firmly settled into the foreground of luxury automobiles across the globe. Backed by a premium name along with superior quality, every model has something enticing and classy about it that has attracted droves of drivers to its brand. No matter the series, from the LS to the RX; regardless of whether it's a coupe, crossover, or full size - the mold has been broken. Face it, Lexus demands respect. With that comes a responsibility personally, which is precisely why we offer only the finest Lexus Accessories and Parts that help you make the best modifications possible.

As the 90s progressed, Lexus began to expand more and more, proving itself as a worthy luxury brand capable of competing with the traditional powers from Western Europe. Over the next decade, Lexus became a preeminent producer of top-quality luxury vehicles and car parts recognized all over the world. Innovative models such as the company's first SUV, the RX in 1998, as well as the first convertible on the roster, the SC 430 in 2001 helped the brand retain its share of the limelight. Without showing any signs of slowing down, the company also introduced future stars like the IS and GX. By now, Lexus's reputation for putting out vehicles that feature quiet yet powerful performance along with plush comfort and eloquent style had long been established. In 2004, Lexus sold its two millionth vehicle in the US, signifying its share of the luxury vehicle marketplace. Lexus has also put together a roster of hybrid models such as the RX 450h, the GS 450h, and the LS 600h. The Lexus Hybrid Drive system combines gas and electric engines which not only boast lower emissions, but also increase fuel efficiency and overall power.

As a division of the Toyota Motor Company, Lexus has been a top manufacturer of luxury cars and SUVs as well as genuine Lexus parts since 1989. The brand got its start from a special project in 1983 directed at developing a luxury sedan for American car buyers. This prototype would later become the Lexus LS, which is the model credited with launching the marque. For the first fourteen years, Lexus vehicles and Lexus parts were assembled in Japan at numerous plants belonging to Toyota in Tahara, Chubu, Aichi, and Miyata, Fukuoka. In 2003, the Lexus RX 330 began to be produced in Canada, marking the first time a Lexus model was built outside of Japan. Over the last twenty years, the Lexus roster has featured some of the most prolific luxury vehicles on the market, including the LS, GS, and RX series, respectively. The company has also consistently received awards throughout the industry for safety, reliability, and overall satisfaction.